I've been thinking about energy a lot recently.  In part it's because I've been working on a course for primary school teachers, so I've had to really think what we teach at KS3 and KS4, and why.

" One reason for the difficulty in deciding what to say about energy at school level is that the scientific idea of energy is very abstract.  It is, for example, impossible to say in simple language what energy is, or means.  Another problem is that the word ‘energy’ has entered everyday discourse, with a meaning that is related to, but very different from, the scientific one. " Millar, Energy Summit Paper, 2012

At KS3, energy is mostly naming of parts:

Look on the TES website and there are numerous resources which involve kids naming resources, match energy types, say how energy is being transformed etc.

e.g in Chemistry to work out which is the most favourable reaction, in biology as calories, in physics to calculate efficiencies.

That doesn't mean that we have to introduce equations early on.  Most children will be familiar with the idea of fuels, either fossil fuels or food.  That can be a good place to start a discussion of energy and the idea of use and conservation of energy
The KS3 model that many people use at the minute doesn't allow us to focus on the importance calculations in energy. It suggests that there are different types of energy, that can be found in different places. Energy is used to explain things, to give mechanisms, but energy in itself doesn't make good explanations.

It isn't that you have to be hung up on the language (should it be transform, transfer etc) but what is the underlying model and how useful is it. And I think a good starting point is...

Institute of Physics model of energy as an 'orange liquid'.
The IOP model, developed by Lawrence, suggest that we limit how we think of energy to those situations where we can (or want to) do calculations - maybe not at KS4 but later. We think of energy as being stored and shifted.

e.g
The last example shows how we can then go on to build Sankey diagrams to consider efficiency.

So for example, using a pull-back car.
My starting situation is just after I have pulled back the car.  An elastic energy store has been filled. 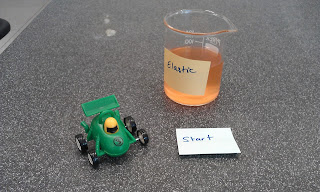 At the end of it's motion, the elastic energy store has been emptied.  But where has that energy gone? 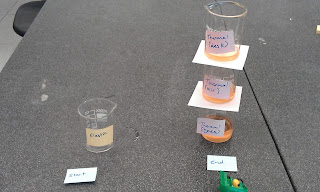 Mostly, it's heated up things - the desk, the tyres, the surroundings.  Some thermal energy stores have been filled.

Advantages:
Disadvantages
There are two main areas - the disadvantages of the model as a physical representation, and the perceived practical disadvantages:
The third one is less of an issue now that KS3 SATs have gone. KS4 examiners will generally ask questions involving calculations (KE, GPE and efficiency) or about wasted energy. Given what candidates write at GCSE, it is unlikely that there will be problems with terminology.

Which is logically consistent, but not how students and teachers usually think of them.  However, putting aside quantum definitions of the energy of a photon, we can't store light or sound. They are both transient objects. We do however think about light in terms of rate of energy transfer (watts or joules/sec).

Part of the problem is that we tend to want to 'daisy chain' links of energy transfer, worrying about where the energy is at every point between the start and end.  So we'll conventionally talk about the "chemical energy in the battery being transferred/transformed to electrical energy in the wires, and then light energy from the bulb, and then ...."  But where should we stop?  Should we consider the light as it reaches our eyes, or the electrical impulses that are generated in the cells on the retina, or what about at the synapses? None or these are particularly useful.

Far better to stick to things we can measure.  Why are we interested in the bulb?  Often because we want to know how much energy per second it uses - it's power, not where the energy has gone.

Robin Millar's Towards a research-informed teaching sequence for Energy, including a suggested teaching sequence. I would strongly recommend that you read this paper - it very clearly sets out some of the issues, and describes a way forward.
If I was designing my KS3/KS4 curriculum, I would use this paper - and work with my feeder primary schools to get them to use his ideas too!

Energy Summit: Developing a framework for the teaching and learning of energy. Assorted papers.

You could also discuss this further on TalkPhysics